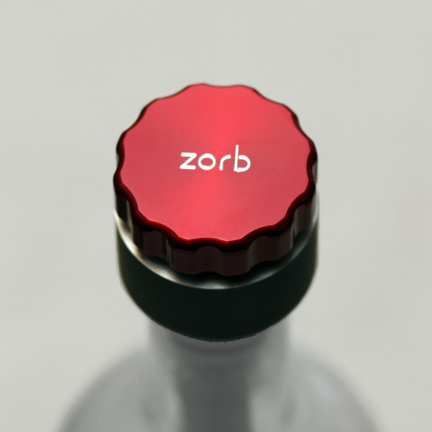 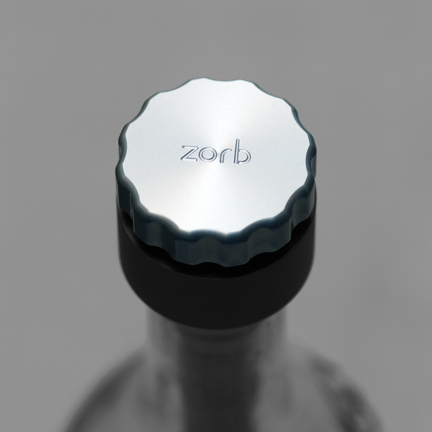 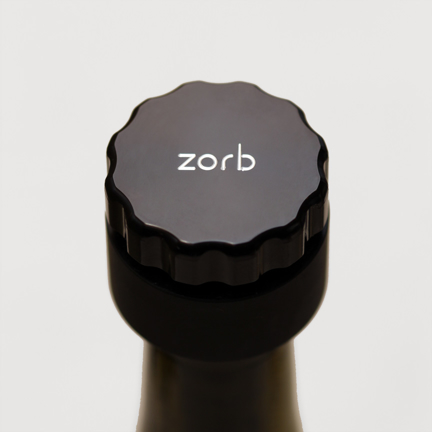 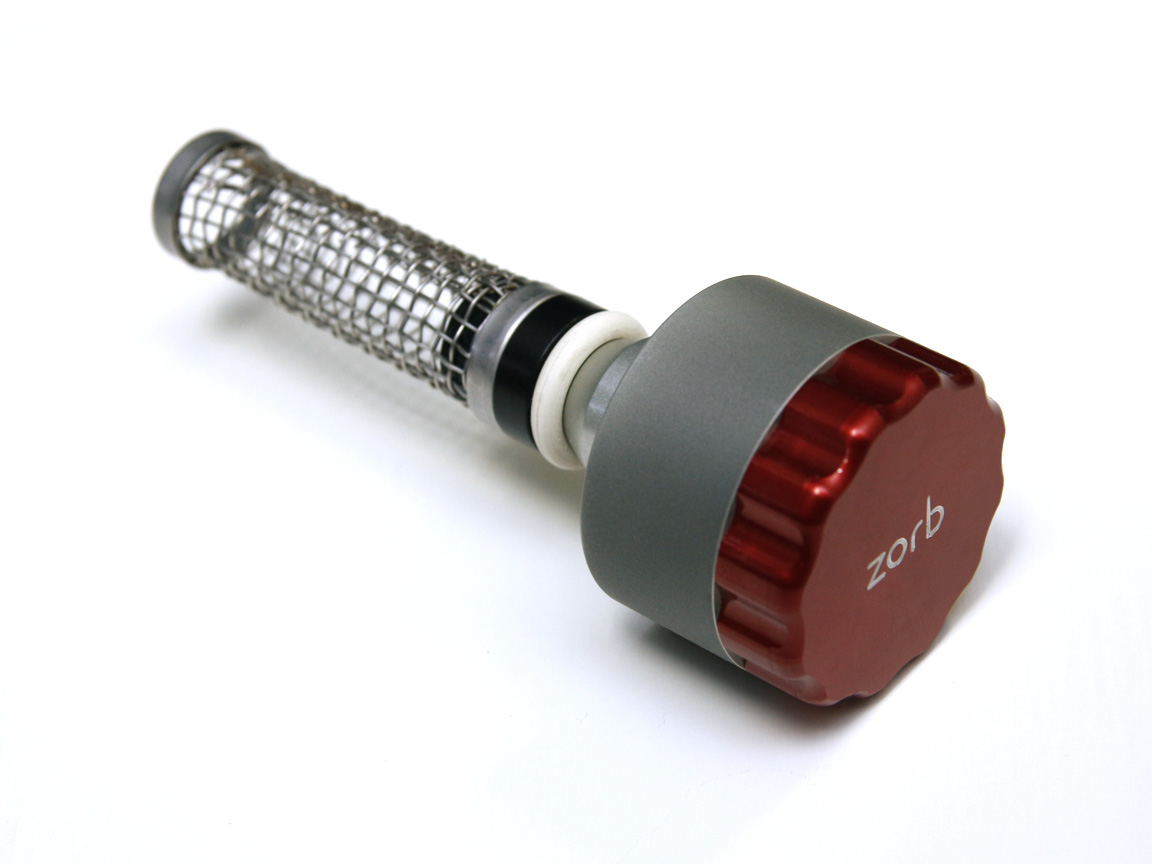 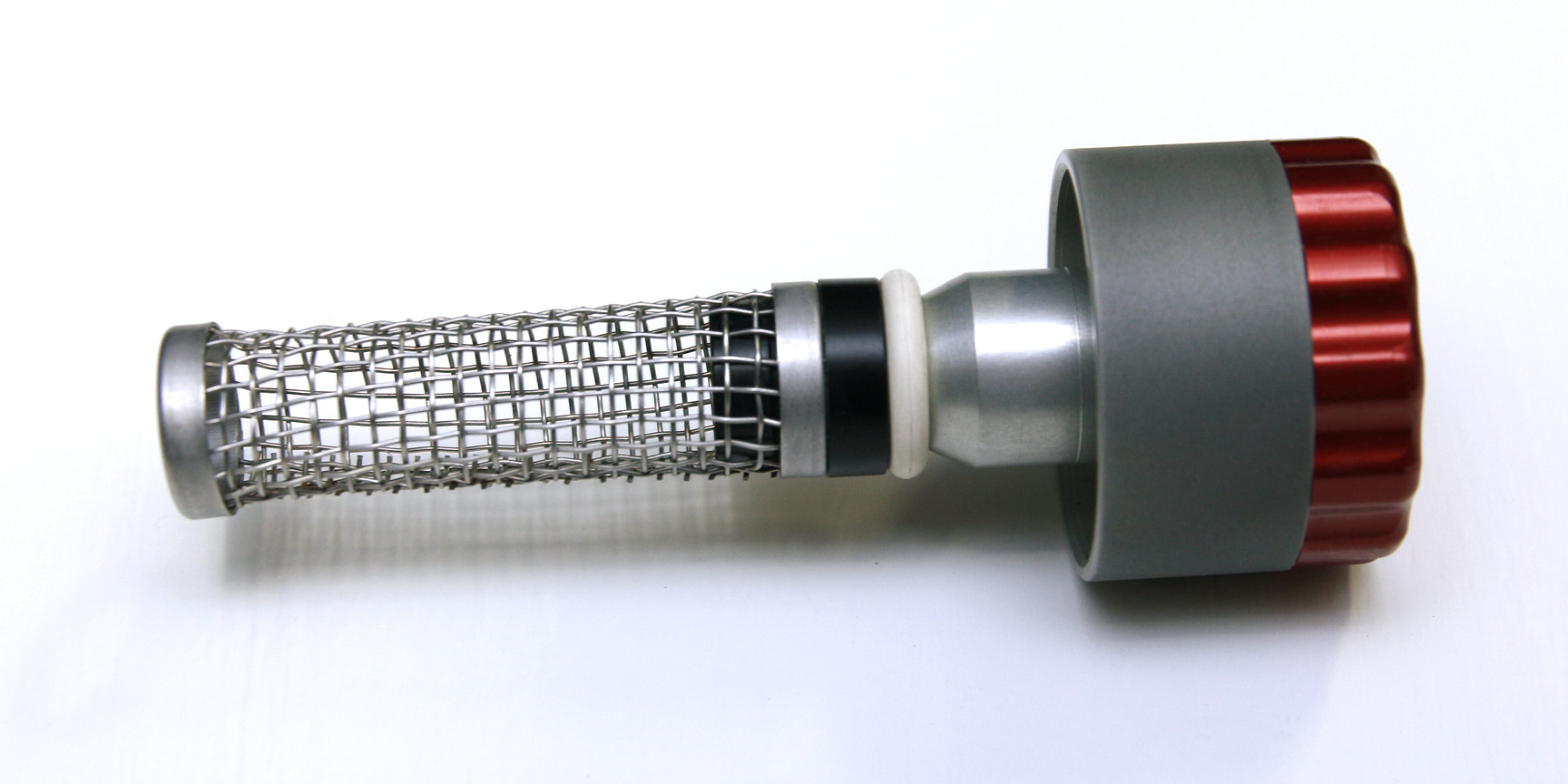 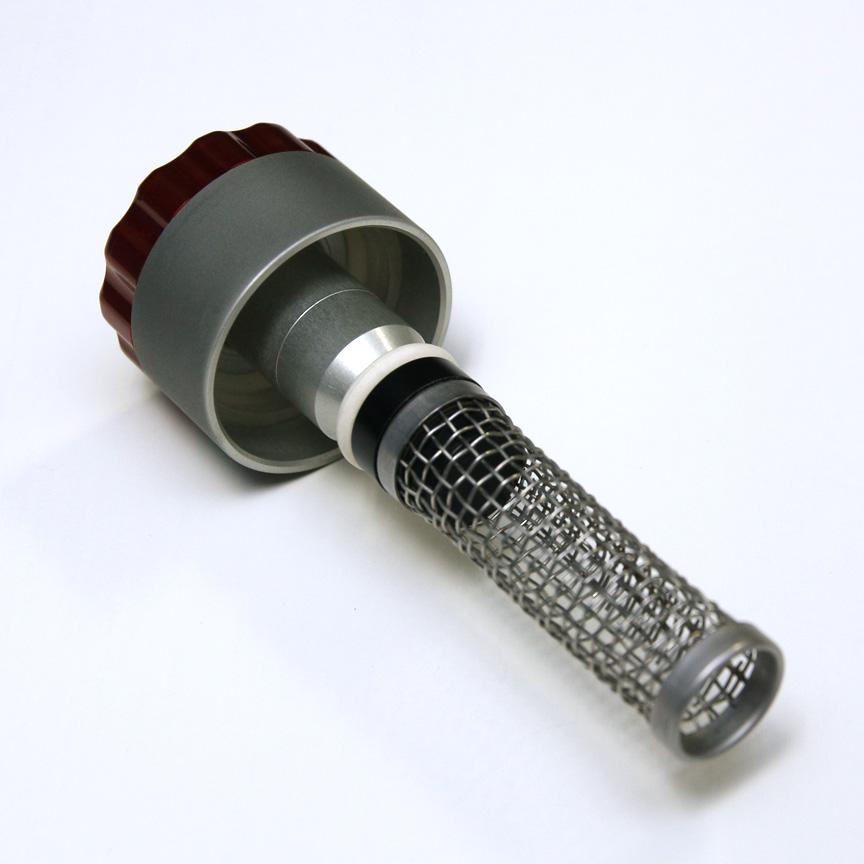 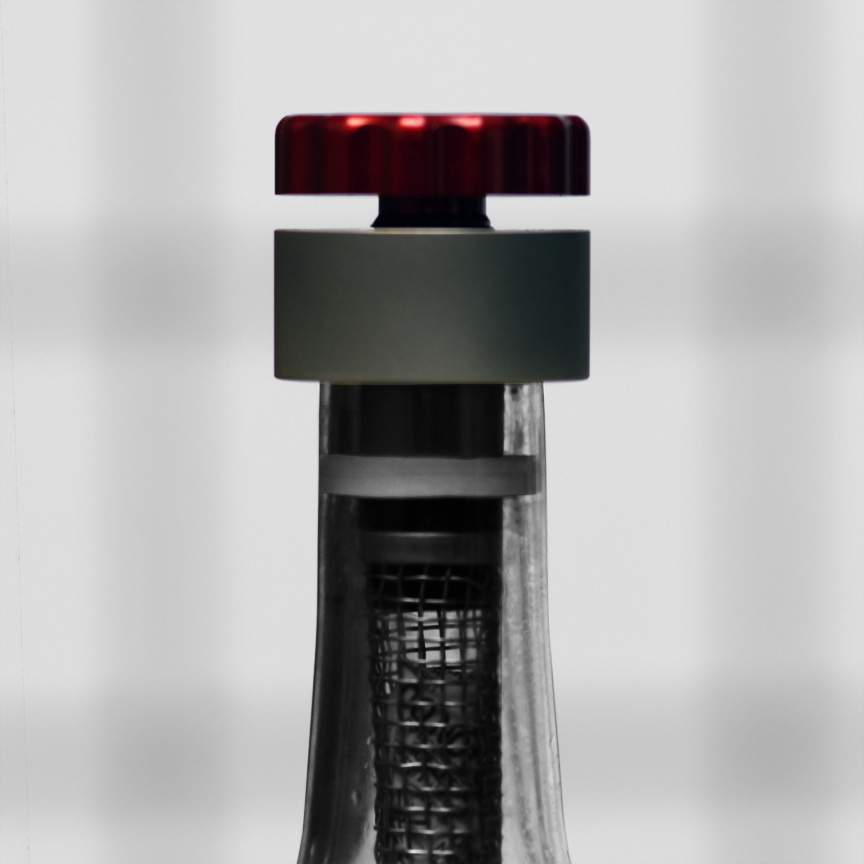 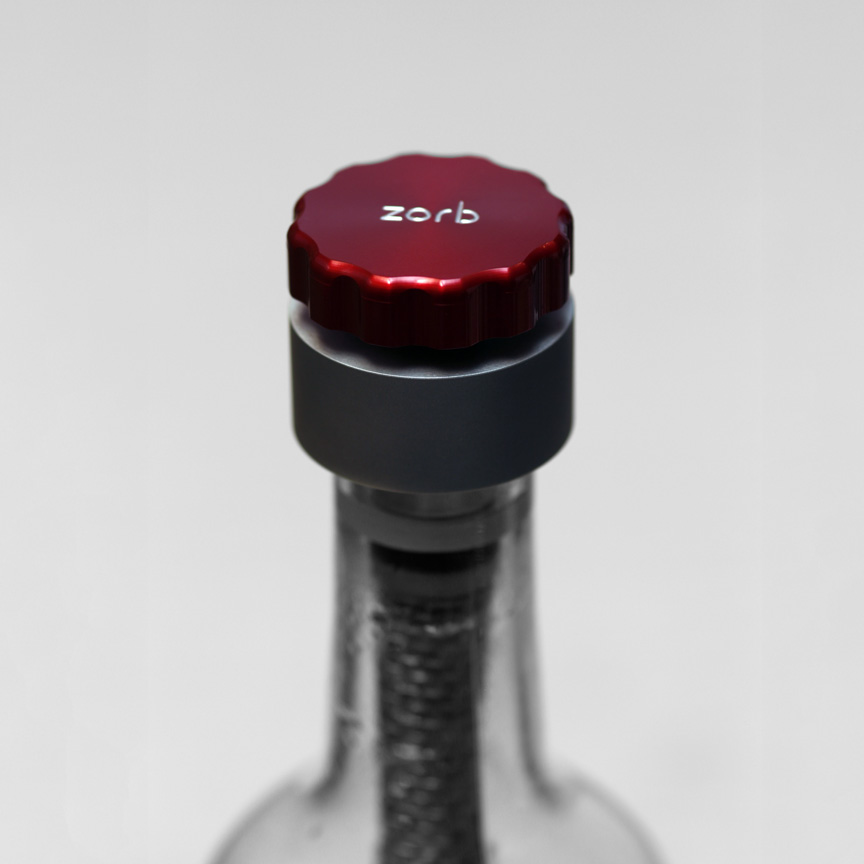 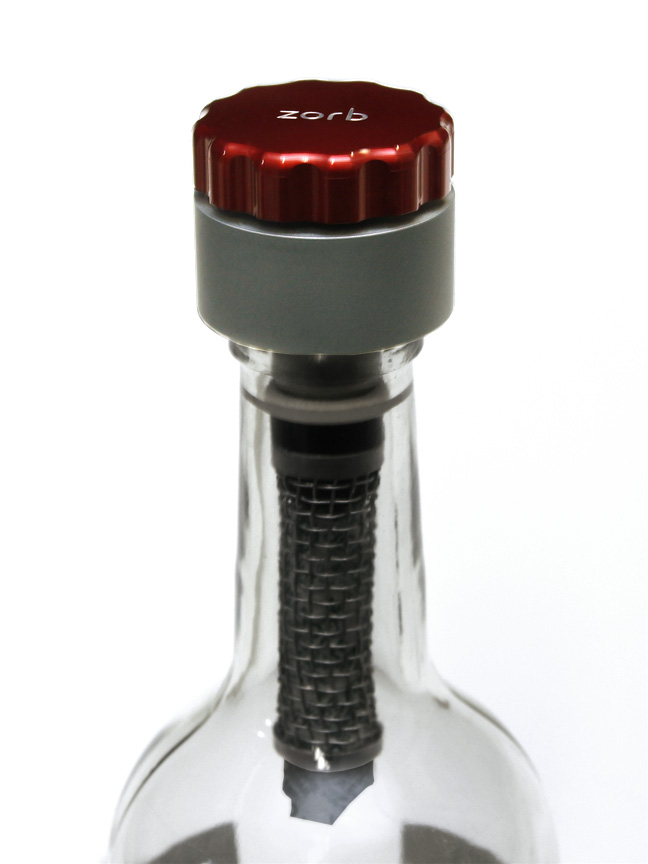 An unopened bottle of wine contains essentially 0% oxygen. Any oxygen that had entered the bottle during filling or as ingress through the cork is depleted by reacting with sulphur dioxide or wine compounds.

Conversely, freshly uncorked wine soaks up oxygen like a sponge. Upon being exposed to air, wine will absorb oxygen until the saturation level is reached. The agitation caused by pouring a glass only accelerates the uptake. This is why re-inserting the cork after opening a bottle doesn't really work. The bottle headspace is now full of air, and oxygen has already started going into solution.

The good news is that reactions between dissolved oxygen and wine compounds take much longer to complete - hours to days. It's this prolonged reaction time that allows the Zorb to be so effective.

By replacing the cork with a Zorb and firmly tightening the knob, an impervious seal is created against the bottle neck, allowing the fast-acting Zorb sachet to do its work. The sachet, which is now situated optimally in the bottle headspace with a maximum of exposed surface area, pulls oxygen out of solution before it has time to react with the contents. Best of all, it leaves the aromatics where they belong, inside the bottle!

Once the Zorb is attached, keep the bottle upright. While the sachets are non-toxic and FDA approved, they are designed to stay dry.

Critical to the speed of these sachets is the amount of sachet area exposed to the bottle headspace and the integrity of the seal, allowing the Zorb system to scavenge O2 significantly faster and deeper than competing systems.

Kneading the sachet before inserting it in the Zorb helps to break up and mix the ingredients, as well as maximizing the amount of exposed surface area. This will increase the O2 uptake speed.

This graph shows how wine absorbs oxygen when a Zorb isn't utilized. Specifically, it plots the concentration of oxygen in a half-full 750-ml bottle of wine at a temp of 65º F over time. The graph is instructive in that it shows a steep decline in concentration, initially about .7% per hr., as the wine soaks up oxygen in the headspace. The graph levels off, and the then around the 50-hr. mark, there's a decline in oxygen concentration - around .04% per hr. as dissolved oxygen starts reacting with the wine, which reduces dissolved-oxygen levels, allowing further absorption into the wine. The oxygen uptake eventually tapers to about .014% per hr. at around 130 hours where the oxygen concentration has dropped to 11%.

Keep in mind that pouring a glass of wine will result in much faster oxygen uptake from what is shown in the graph, as a result of agitation and the exposure of more wine surface area to air. One approach to staving off the eventual oxidation of the remaining wine in the bottle is to pour it into a smaller bottle where the reduced headspace translates to less potential O2 absorption, but that doesn't address the O2 that wound up in solution from having poured the wine, twice!

Another common approach is to pull a vacuum on the bottle. This is not recommended because the vacuum pulled by the typical wine device is not deep enough to pull oxygen out of solution; and worse, even partial vacuums can extract aromatics, which will deaden wine. Ideally, we only want an oxygen vacuum, and one that gets as close to 0% as possible. Further, any O2 that comes out of solution needs to be captured, thereby maintaining the oxygen vacuum. The good news is that this is exactly how the Zorb works!

What if the sachet contacts the wine?

While it's best to keep the bottle upright and stable when a Zorb is attached, inadverdant contact will not render the wine harmful. The sachet materials are non-toxic and completely food-safe. However, depending on the level of contact, the sachet may emit an odor, and the taste of the wine could be affected. If you suspect the satchet has been compromised, just replace it with a new one.

Does the last sachet in the jar of 30 work as well as the first?

Yes. In our tests, which entail using two independent oxygen sensors, the last sachet matches the first sachet in speed and ability in de-oxygenating a 750-ml bottle across five equal pours. When you remove a sachet from the jar, the volume of air essentially equal to the volume of a sachet enters. The remaining sachets in the jar can easily handle this ingress without a significant loss of capacity.

Why do you use a sachet instead of an attachable cartridge?

The sachet provides the thinnest possible barrier between the oxygen-absorbing materials and the bottle atmosphere, allowing for maximal oxygen uptake speed. Also, the flexible wrapper allows the sachet contents to be kneaded prior to installing on the bottle, which further improves the uptake rate.

Can I refrigerate the wine with a Zorb on it?

Yes. Neither the Zorb itself nor the satchet are harmed by temperature swings. However, there are a few caveats to take note of when refrigerating: First, having the bottle in the door of the refrigerator can result in splashing of the satchet with wine when the door is repeatedly and perhaps aggressively opened and closed. We recommend finding another spot that's less 'active'. Secondly, the Zorb is most effective at room temperature. For maximum oxygen update, you might want to leave the bottle at room temperature for a few hours after pouring, to give the Zorb a bit of a "head start" before refrigerating. 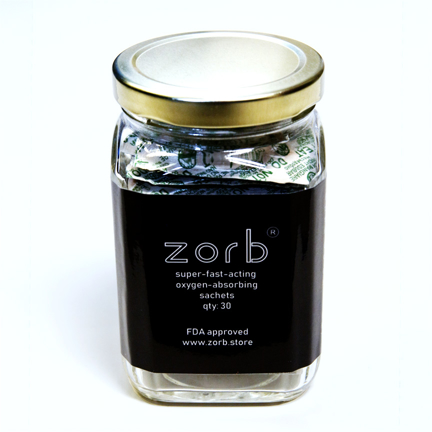 Ultra-fast acting oxygen-absorbing sachets. Use with Zorb device. One sachet will serve one standard wine bottle.
$12.95 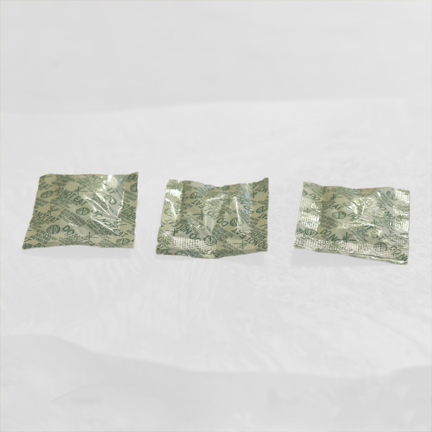 Ultra-fast acting oxygen-absorbing sachets. Use with Zorb device. One sachet will serve one standard wine bottle.
$24.95

One sachet will de-oxygenate one 750-ml bottle with 5 pourings - where the Zorb is detached, a glass is poured, and the Zorb with the same sachet is re-attached. When the bottle is finished, remove the sachet and discard. The sachets come in an air-tight jar that will keep the sachets fresh for months to years. You should find that the last sachet in the jar is as effective as the first in terms of oxygen-uptake speed and capacity, as only a small volume of air enters the jar with the removal of each sachet. The remaining sachets work together to absorb oxygen ingress, keeping the jar under an oxygen vacuum.